Species indicators are not making progress toward the targets. None of the indicators have improving trends, with many marine bird species, Southern Resident Killer Whales, and Pacific herring populations declining. There have been recent improvements with certain herring stocks, and Chinook salmon populations are stable but at historic lows.

For more details about ecosystem conditions relating to this goal, please see our Story Map on Puget Sound Info.

Climate change poses a high risk to most Vital Signs related to Thriving Species and Food Web. Orcas, Chinook salmon, and Pacific herring are at high risk. Birds are at moderate risk (Siemann and Binder 2017).

Signals from the 2020 State of Our Watersheds Report

Blocking Culverts Impact Salmonid Survival: During the first six years of implementing the U.S. v. Washington culvert case injunction, the state of Washington has corrected 150 fish-blocking culverts. At the current rate, if additional support is not gained, the corrections of the remaining 799 culverts would be completed in 32 years (2052).

European Green Crab Threaten Native Species: Between 2016 and 2019, over 360 European green crabs were captured in the Puget Sound Region by Washington Sea Grant, Washington State Department of Fish and Wildlife, tribes, U.S. Fish and Wildlife Service, and partners. Although European green crab occurrences in the Puget Sound region have so far been relatively rare, the impacts of their populations in other parts of the world indicate the potential for widespread changes to Puget Sound’s ecosystem if action is not taken to limit their spread. Green crab are outcompeting juvenile native Dungeness crab for space, increasing the threat to Dungeness crab from predators and decreasing food availability.

The Stillaguamish Tribe of Indians and Audubon Washington, with support from the PSEMP Marine Birds Work Group, led the development of the Avian Habitat Suitability Models for Puget Sound Estuary Birds. This study provides a scientific basis for integrating birds into estuarine restoration and conservation. Extensive habitat loss and degradation in Puget Sound estuaries has impacted the abundance and distribution of birds that rely on estuarine and coastal habitat. The study identifies valuable information about the environmental conditions that best explain where five “narrative” species are likely to occur and where they are most abundant. For example, wetlands – particularly estuarine emergent wetlands – and mudflats are essential to support native species populations. It also points to specific actions that land managers can take to ensure Puget Sound continues to serve as a vital link for Pacific Flyway birds. The study makes clear recommendations for restoration and monitoring and highlights the need for a regional monitoring framework. 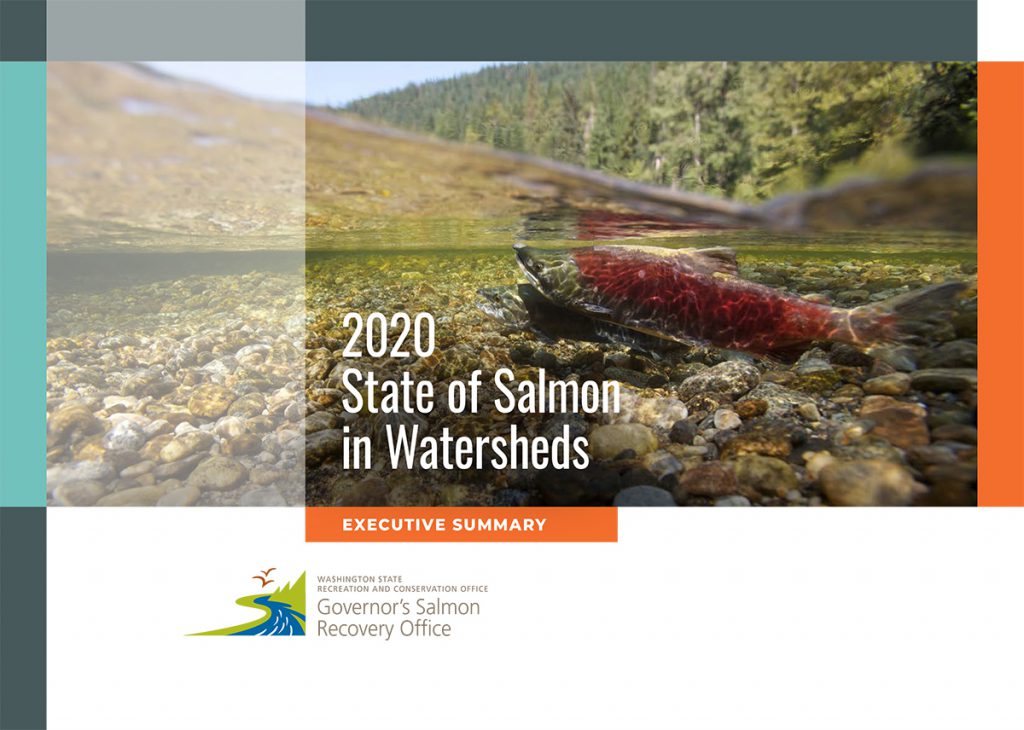 State of Salmon in Watersheds overview

Every two years the Washington State Recreation and Conservation Office reports on the State of Salmon in Watersheds. This web report provides stories and data about salmon, habitat, and salmon recovery. It documents the collaborative work of state and federal agencies, Indian tribes, regional organizations, and nonprofits to recover salmon and steelhead stream by stream.

The 2020 report describes a wide range of progress toward recovery for 14 species of salmon and steelhead listed as at-risk of extinction under the Endangered Species Act. In Puget Sound, Chinook salmon are in crisis. Summer chum abundance, however, is approaching federal recovery goals in both the Hood Canal and Strait of Juan de Fuca populations.