Condition of the Puget Sound
Ecosystem

How is the Puget Sound ecosystem faring? That’s the question that the State of the Sound seeks to answer. Because the Puget Sound ecosystem is so complex and dynamic, the answer through the years has consistently been—and continues to be—“It depends.” In some localized areas, such as specific bays and watersheds where water quality no longer threatens to close shellfish beds, the answer is “Better.” Applied to an indicator species like orcas, however, the answer definitely is “Worse.” Assessing the condition of Puget Sound is also tied to human wellbeing. Toxic chemicals, for example, persist throughout the food web, reducing fishing opportunities and threatening human health-sometimes disproportionately for indigenous or minority communities. Finally, some indicators lack enough data to evaluate change over time, such as newer human wellbeing indicators like Sense of Place, for which we are only beginning to understand baseline conditions. Because of this variation in assessment of indicators, we continue to label the overall status and progress of conditions in Puget Sound as “Mixed.”

FROM WATER TO WHALES:  TRACKING A CHANGING ECOSYSTEM VIA THE PUGET SOUND VITAL SIGNS

Using data collected from our partners, the Partnership tracks more than 50 indicators of ecosystem condition, including human wellbeing. These indicators and their targets support the Puget Sound Vital Signs, which are measures of ecosystem health that guide the assessment of progress toward Puget Sound recovery goals.

Want to know more about the Vital Signs and their indicators? Visit vitalsigns.pugetsoundinfo.wa.gov 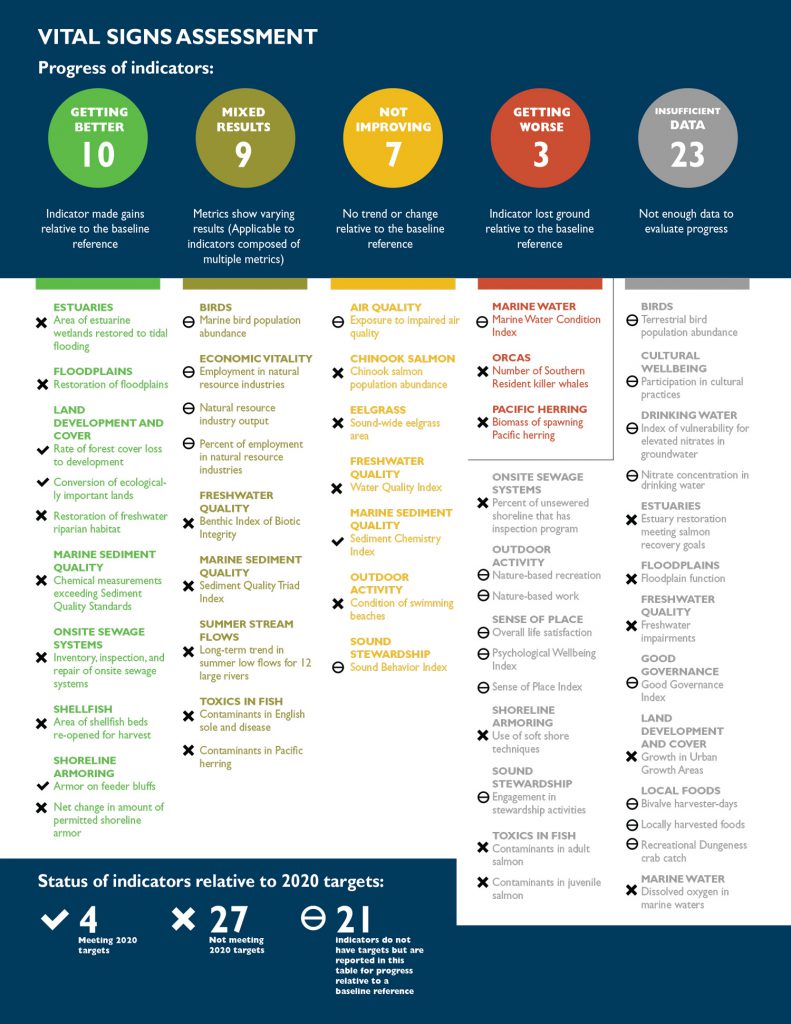 No Vital Sign, taken alone, can accurately tell the condition of Puget Sound. Vital Signs and their indicators often influence one another. When one falls short, it often predicts the worsening of other, linked Vital Signs. For example, the  Orcas, Chinook Salmon, Pacific Herring, Local Foods, Outdoor Activity and Economic Vitality Vital Signs, taken together, reveal a bigger picture of trouble in the ecosystem than any one Vital Sign might alone portray.

The Center for Whale Research reported in August 2019 that the population of endangered Southern Resident orcas fell to 73 after the presumed deaths of three orcas not seen since early spring. The number of Southern Residents is the measure we use to determine whether the Orcas Vital Sign is getting better or worse. The Orcas Vital Sign, in turn, is just one of four that comprise the recovery goal of Thriving Species and Food Web.

The abundance of Chinook salmon is well below recovery goals and, in fact, the Puget Sound population has changed very little since the species was listed as threatened in 1999. Likewise, Pacific herring stocks are currently below both their 2020 targets and baselines, set as a 25-year average from 1986 to 2010.

Contaminants found in both Chinook salmon and herring, caused by pollution, contribute to these declines. Reported contaminant levels represent a health risk for the fish themselves and are risky enough for humans that fish consumption advisories seek to limit their consumption. Research has shown that toxins in orcas are a contributing factor to the decline of Southern Residents. The impacts of polluted fish are particularly concerning for tribal communities and immigrant communities that rely on fish for cultural and subsistence reasons.

Every day, hundreds of dedicated people go out counting fish, measuring temperature, testing chemicals, and surveying human wellbeing, to gather precious information about the condition of the ecosystem.  Because of the complex physical, biological, and human components of ecosystems, understanding their status and interactions requires time, consistent measurement, and a good dose of interdisciplinary collaboration. A sustained and collaborative study of the ecosystem is particularly important when evaluating the effects of intense pressure from human population growth, development, and climate change, while also considering the benefits people receive from the ecosystem. The Partnership’s Vital Sign reporting program relies on data collected through long-standing monitoring programs managed by state and federal governments, tribal natural resource agencies, non-profit groups, local jurisdictions, and academic institutions. Such programs are all too often an overlooked component of Puget Sound recovery when it comes to allocating funding. But without them, it would be impossible to interpret how well recovery efforts are working and what adjustments need to be made to improve recovery outcomes.

With diverse organizations conducting research and monitoring in the Puget Sound region, the Puget Sound Ecosystem Monitoring Program (PSEMP) brings together partners from all levels of government, tribes, non-governmental organizations, academia, Local Integrating Organizations and watershed groups, and businesses. PSEMP provides coordination support and a framework to help monitoring programs and partners engage in the recovery process, including improving monitoring of, filling data gaps for, and reporting on Vital Signs. PSEMP facilitates connections among this network of practitioners, helping them collaboratively answer questions critical to ecosystem recovery and clearly present their scientific findings to decision makers.